How To Win At Letterpress

Letterpress is the fun new word game from Loren Brichter, of Tweetie fame. Since you've probably played the game before I won't go into details about the game itself (you could always go to the Letterpress page).

These are just some handy tips to help you do better when playing Letterpress. I can't guarantee you'll win more games than you did before.

The rules state that you can't play a word which is at the start of another word that has already been played. For example, if someone plays PHOTOGRAPH, no one can play PHOTO. However, you are allowed to extend previously played words. If PHOTO is played first, then PHOTOGRAPH is still allowed.

Because extending words is allowed, your opponent can easily steal tiles back from you by adding one or two letters to the end of your word. If you play DOLPHIN and there's an S on the board, your opponent can take all the tiles you just won by playing DOLPHIN.

To combat this, always try to play the longest version of the word that's possible. Add S or ING to the end of your word to make sure it can't be extended any further. Of course, this isn't foolproof, since if you play PLAYERS it's still possible to play PLAYED afterwards, which steals most of the tiles you just used.

Remember the "cheating" words from Scrabble

Letterpress seems to use a similar dictionary to Scrabble, so it lets you have the two-letter words some people consider "cheating": QI for when there's a Q but no U, and ZA for when you can't remember any other words containing a Z.

Obviously these words don't score you many blue tiles so use them only when you're desperate for a word with an obscure letter.

Don't forget about your own tiles

It can be very easy to focus only on stealing red and grey tiles, and forget that you're allowed to use your own blue tiles to create words. You won't gain any points for using blue tiles, but it might make finding a good word a bit easier.

Since you need to own the most tiles to win the game, protect the ones you own by surrounding them on all sides. The best way to do this is to start in one corner and work outwards. Here's an example of what I mean, starting from the lower right corner: 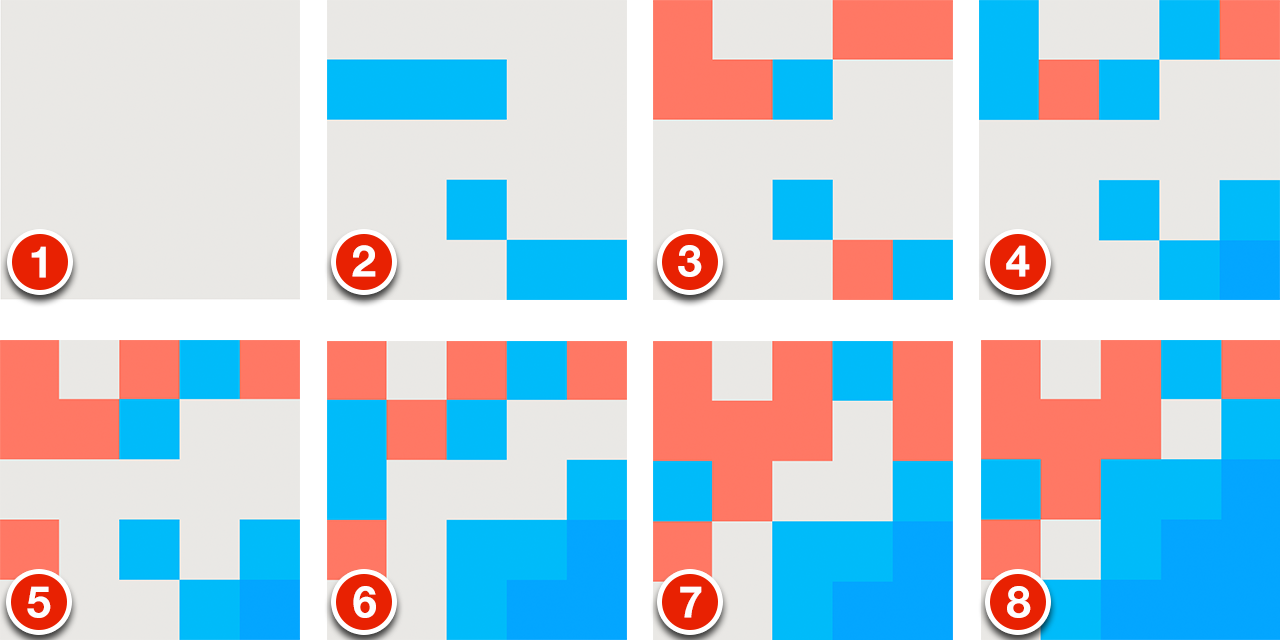 Playing this way might not keep the most important letters protected (if there is only one E, for example, you'd probably want to grab that early on), but it means you most likely have more tiles protected than your opponent.

Don't forget, the whole point of Letterpress is to enjoy the time you spend playing it. There's no reason to even be competitive. You and a friend could just try and find all the words on the grid with a certain theme.