On the surface, Logitech's new Slim Combo keyboard case for the new 10.5-inch iPad Pro seems like it should be a better and more practical version of their Create keyboard for the 9.7-inch iPad Pro. However, stick your iPad into the case and use it for a while, and you'll start noticing its flaws and downsides. 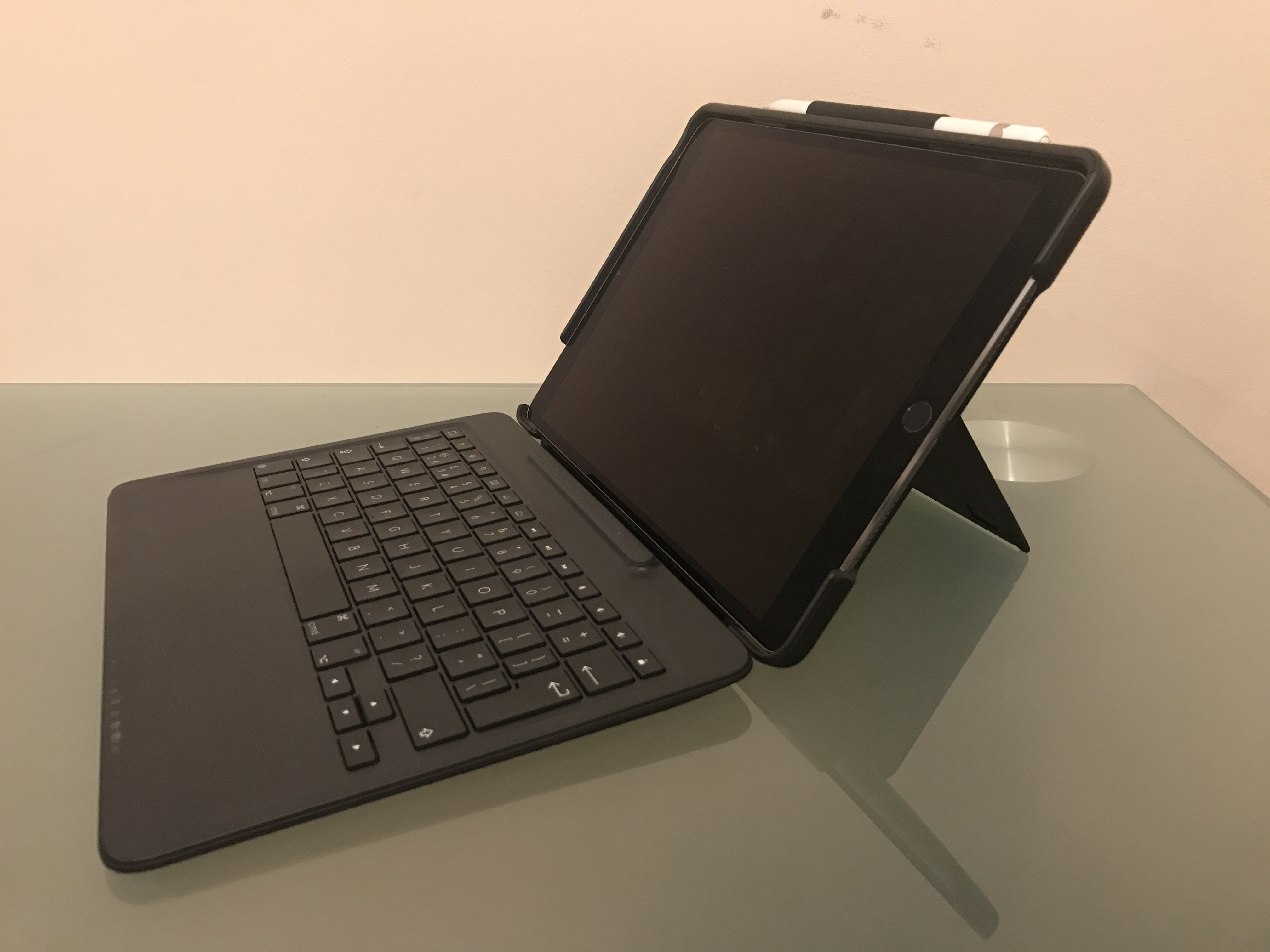 The Slim Combo comes in two pieces; one acts as a shell case for the iPad and the other is a keyboard which magnetically attaches to the bottom. Unlike the Create case, which was a single piece, the Slim Combo acts more akin to Apple's Smart Keyboard, which can be detached if you don't need it. Both pieces are mostly made from black plastic which feels kind of cheap; the outside has a nice textured fabric, but the plastic feels as though it may break at any time.

Also unlike the Create and the Smart Keyboard, the Slim Combo doesn't naturally prop up the iPad into a typing position. On the back of the shell case is a kickstand which folds out to stand the iPad at various angles; this is great because it can be set to any angle, rather than the other keyboards which only offer one or two angles. However, this is a case where ease of use takes priority. It's very easy to fold out the Smart Keyboard and start typing, whereas it's very annoying to turn the entire iPad around, fold out the Slim Combo's kickstand, and turn it back round to find that you've chosen an angle that's just right to reflect a bright light in your face. While it's nice to have the option of various angles, being able to open up the iPad cover and have it automatically stick upright is just nicer.

Once you have the iPad propped up, the keyboard itself is surprisingly nice for that of a case like this. It hasn't really iterated on the design of the Create's keyboard, but it holds the same standard; there's enough key travel to feel like a real keyboard (although a mechanical keyboard, this is not) and the backlight is a useful improvement over the Apple keyboard. A very welcome improvement is the addition of a row of function keys above the number row including a Home button, access to Spotlight, and volume controls (still no escape key though). A lot of people will prefer the feel of the real moving plastic keys, as opposed to the "bubble-wrap keys" on the Smart Keyboard. 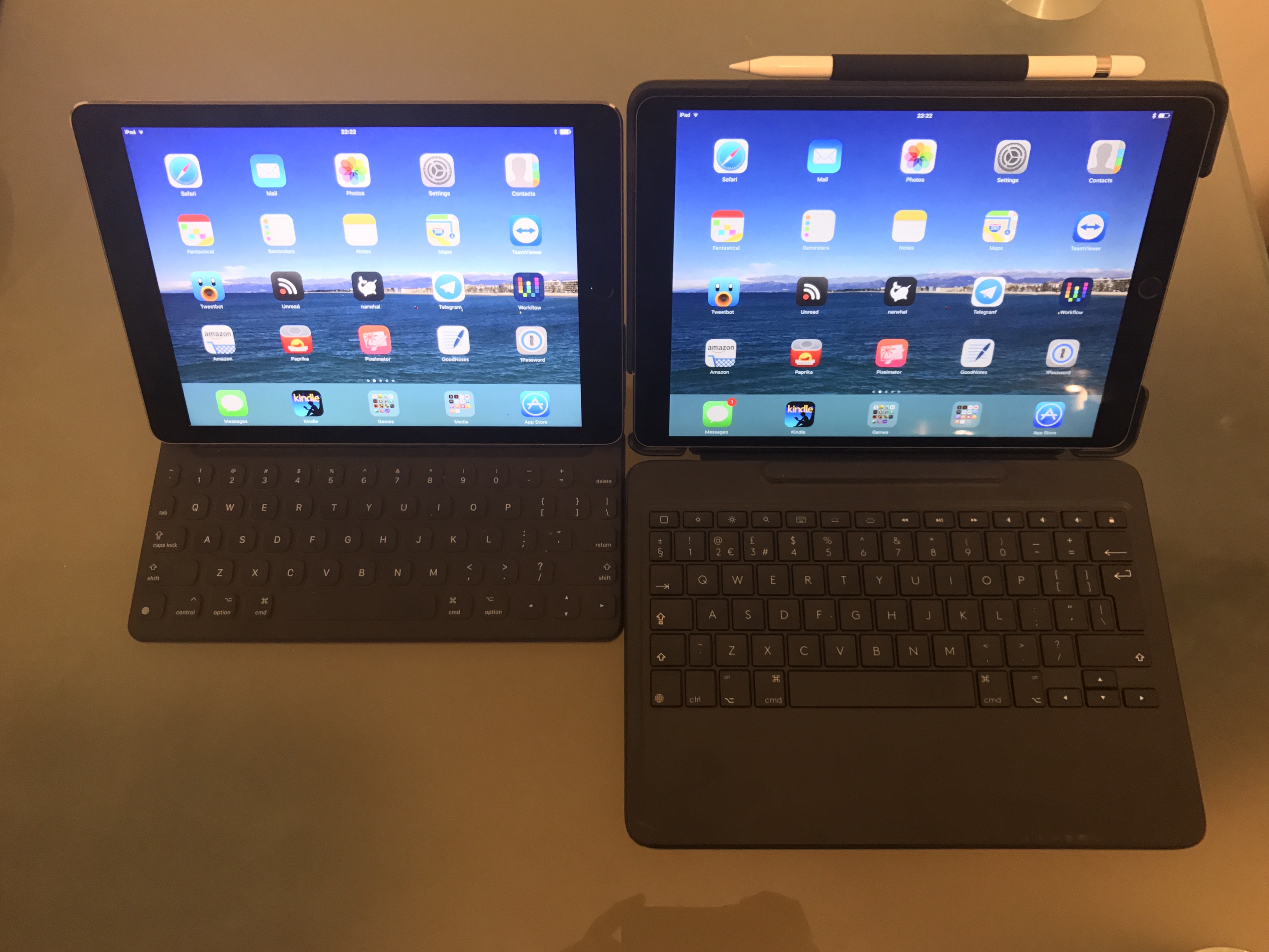 There's one major downside once you have the keyboard folded out on the Slim Combo: the wrist rest, which seems as though it should be a nice feature, gets in the way and moves the iPad itself too far away. The iPad still doesn't support full keyboard navigation, so you still need to touch the screen fairly often, and the keyboard on this case pushes the screen so far back that it becomes uncomfortable to use. The 12.9-inch version of the Slim Combo allows the wrist rest to be folded back, bringing the screen back closer, but for some unexplained reason the 10.5-inch version didn't receive this ability. Compared to the old Create and the Smart Keyboard, the amount of unused space on this keyboard worsens the experience of using an iPad with a physical keyboard. Additionally, unlike Apple's keyboard, the keyboard cannot be folded back behind the device; if you aren't using it, it has to be removed entirely.

Now let's talk about the other major flaw, the sheer size and bulk. For a product with "slim" in its name, this case makes the sleek iPad Pro feel more like lugging around a Titanium PowerBook. In fact, the Slim Combo actually makes the iPad bulkier and heavier than the Create. I really like the feeling of carrying around an iPad which is thinner than a pencil; I really don't like making my iPad feel like a full-sized laptop in my bag. 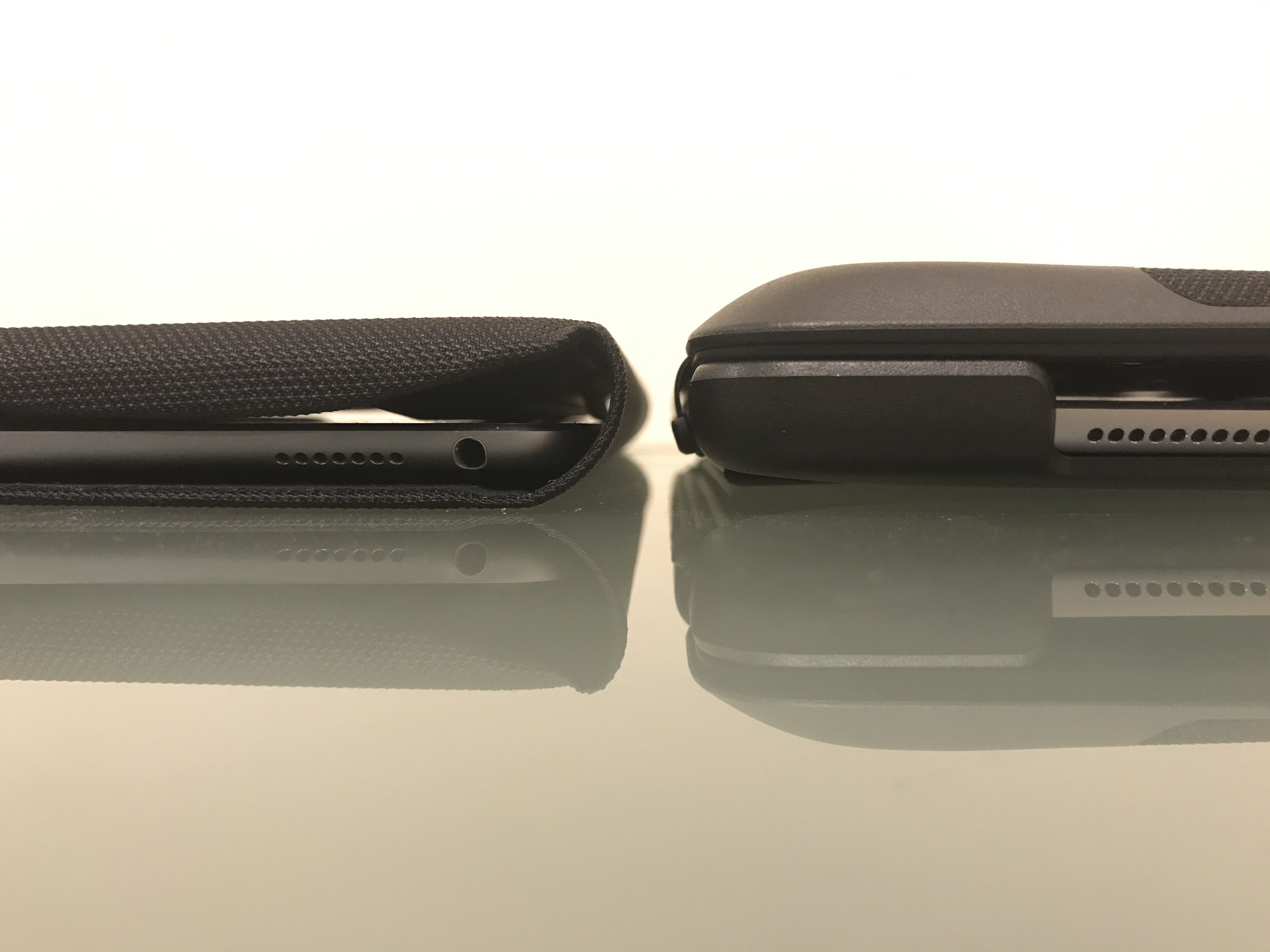 Overall, for £109.95, the Slim Combo doesn't offer anywhere near as much value as the Create did, and it certainly doesn't live up to its name. Even though I really liked the Create with my 9.7-inch iPad, I've returned the Slim Combo and opted for the 10.5-inch Smart Keyboard instead. The Smart Keyboard may be £40 more expensive, but it's a much nicer experience, and feels a lot more like an iPad keyboard should.