The worst part about travelling anywhere for more than a day trip is packing. More specifically, trying to make sure you have all the cables and adapters you'll need to charge all the devices you're bringing along.

I used to try to keep one of everything I need in the backpack I use as a laptop bag. However, on multiple occasions I've either taken something out of that bag and forgotten to return it, or I've gone somewhere using a different bag and forgotten to transfer all the cables to the other bag.

After reading Casey Liss's post about his "go pack", which he uses to keep all his cables and adapters together in one place, I decided to totally steal his idea (as well as his blog post format) and create one of my own. 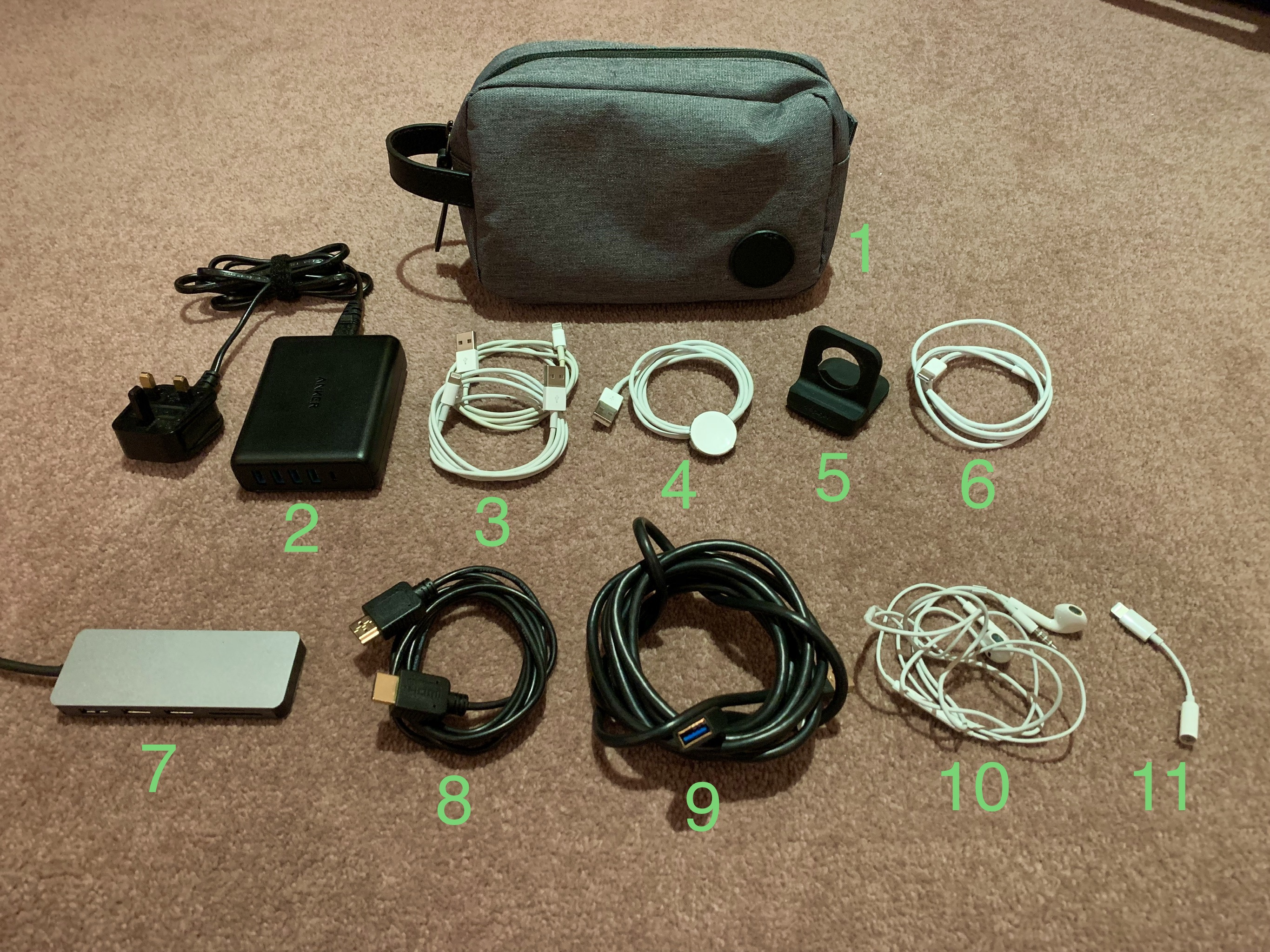 Some of these links are affiliate links, meaning I'll get a small amount in return if you buy something.

This bag stores all the other items mentioned below. The idea is that if everything lives in this small bag, it will always be together, easy to find, and straightforward to transfer between bags if necessary.

This fairly small brick plugs into the wall and provides four USB-A ports and a USB-C port capable of PD charging at up to 30W. That's enough ports to charge two iPhones, an Apple Watch, either an iPad Pro 2018 or a MacBook Pro using USB-C, and one other item such as a Kindle. It also simplifies travelling to other countries, since you only need one travel adapter.

Obviously Apple branded cables are a lot more expensive than equivalents such as Anker or Amazon Basics, but I've bought enough iPhones in the past that I have more than enough official cables lying around. Two cables covers charging two phones overnight.

I would never, ever trust a third party Apple Watch cable. I tried using one once, and my watch shut down from overheating. Apple also offers a 2 metre version for £39, but I've never found that I needed a longer cable.

I like using my Apple Watch in Nightstand Mode, which is difficult to achieve with a bare cable, because it tends to disconnect from the watch if you try to set the watch down vertically. This stand holds the watch and the charging cable steady for Nightstand Mode.

I wanted to put a USB-C cable in the bag, and this one came with my iPad. I wouldn't necessarily say this is the best option due to its price, but I happened to already have it anyway.

Any recent MacBook Pro owner is probably a resident of Dongletown, and I'm no different. This (totally unbranded) USB-C adapter has three USB-A ports, an SD card slot, HDMI, and USB-C passthrough. It gets the job done. The HDMI port doesn't support 4K60, but chances are I'm only ever using it to watch Netflix or Plex anyway, which don't need 60fps support.

One time I made the mistake of going away without an HDMI cable, and ended up having to watch videos by balancing my laptop on my lap in bed. Now I bring this HDMI cable with me so I can connect to the TV which is usually around somewhere. I picked this particular one because it's incredibly thin, so takes up less space in the bag.

With everything charging through the Anker brick, this USB extension cable is paired with one of the Lightning cables to allow one of the two phones to be charged on the opposite side of the bed.

Normally I use either AirPods or Bose QuietComfort headphones, but if I'm ever in a situation where one of those is out of battery (or I forgot to bring them) then EarPods will do in a pinch. As mentioned before, I've bought far too many iPhones in the past, so I have an abundance of these laying around. I specifically picked the 3.5mm variant over Lightning so that they also work in a MacBook Pro or a Nintendo Switch.

The aforementioned EarPods are no use for an iPhone without this adapter. I still had this adapter in a drawer from my iPhone 7.

Overall the cost of this go pack, if you were to buy everything right now, would be just over £200. However, as mentioned, I already had a lot of this stuff going spare already; I only spent around £55 purchasing the bag and some of the items to fill it with. I believe that £55 is well worth it to avoid some of the stress of packing.