The worst part about travelling anywhere for more than a day trip is packing. More specifically, trying to make sure you have all the cables and adapters you'll need to charge all the devices you're bringing along.

I used to try to keep one of everything I need in the backpack I use as a laptop bag. However, on multiple occasions I've either taken something out of that bag and forgotten to return it, or I've gone somewhere using a different bag and forgotten to transfer all the cables to the other bag.

After reading Casey Liss's post about his "go pack", which he uses to keep all his cables and adapters together in one place, I decided to totally steal his idea (as well as his blog post format) and create one of my own.

In macOS 10.11 El Capitan, the full screen feature gained the ability to display two apps side by side in split view. The most common way I've seen people activate split view is to make an app full screen, then use Mission Control to drag another app on top. However, as I discovered recently, there's a much faster and less annoying way to do it.

On the surface, Logitech's new Slim Combo keyboard case for the new 10.5-inch iPad Pro seems like it should be a better and more practical version of their Create keyboard for the 9.7-inch iPad Pro. However, stick your iPad into the case and use it for a while, and you'll start noticing its flaws and downsides.

I Made a Thing: Playlist Abandoner

I've written a tiny browser extension for Safari and Chrome called Playlist Abandoner. It does absolutely nothing until you go to a playlist page on YouTube (youtube.com/playlist?list=xyz). On a playlist page, it adds a little button next to each video in the list. That button opens the watch page for the video. 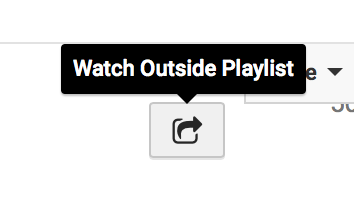 "But wait," you say, "doesn't clicking the video already open the video's watch page?!". Well, yes, but there's one key difference: when you click on a video in a playlist, it opens the video in the context of the playlist, which means that when the video ends, the next one will start playing automatically.

Playlist Abandoner opens the watch page from outside the context of the playlist, meaning that you'll watch that one video and nothing else. Well, unless you click on another video manually, of course.

I mainly built this extension for myself; I make heavy use of the "Watch Later" system on YouTube, and most of the time I only want to watch one video from that list at a time. With Playlist Abandoner, I just click the magic new button and I'm taken to that video, by itself, and when it ends, it just… ends.

I'm sure there's a very small market for this extension, because the main point of YouTube playlists is to be able to watch them all in one go. But if it sounds like something you want, it's available to install from the Chrome webstore.

For Safari, it's a little more complicated; to create an actual .safariextz file, you have to be a member of the Apple Developer Program, which costs $99 per year. Seeing as I don't (yet) have any iOS apps to publish in the App Store, I don't really want to throw away $99 a year to publish a free Safari extension. To install the extension in Safari, you'll need to follow the instructions here.

Nostalgia is Not a Feature

On Thursday, Apple unveiled the latest MacBook Pro, with a fancy new multi-touch screen sitting above the keyboard in place of the function keys. And of course, instead of focusing on the exciting new features of the laptops, people are pointing out all the bad things.

I'm not saying you're not allowed to be disappointed that this shiny new computer doesn't have an SD card slot, or that the 15-inch model "only" has 16 GB of RAM. But people are saying that Apple doesn't care about the Mac any more because they removed the startup chime.

That's right, it's apparently a huge deal that these Macs don't make a loud "BOOOOONG" sound when you first turn them on.

Now, I am aware that the startup chime had a purpose, to signal that the startup diagnostics passed and the machine is fine to continue booting. But do we really need our computers to audibly tell us that every time we turn them on? There are other sounds a Mac can make at startup which indicate a fault; by removing the startup chime, it makes those fault sounds much more obvious.

I bet you never shut down your Mac other than restarting it for software updates and maybe to use Boot Camp. So you probably hear that chime incredibly rarely nowadays anyway.

So why the big fuss about the lack of a chime on these MacBook Pros? Nostalgia. Because that's just how it's always been, so changing it must immediately be a sign of doom.

However, the startup chime is ingrained into the experience of having a Mac, I'm sad to see it go. It’s tradition. It’s like losing the Happy Mac all over again.

"Tradition". "Part of the experience". These things may be true, but forgetting how loud your system volume was last time you shut down your computer and disturbing a quiet room with a BOOOOONG isn't a good experience.

Paired with the fact that apparently these computers turn on as soon as you open the lid, even if they were shut down, I think this is actually a great feature. Clearly Apple is attempting to design these laptops to feel like they're always ready to use in an instant. You don't even need to care whether it's in sleep mode or turned off. Just open the lid and your computer is there waiting for you. Isn't that a great idea for the experience of using a Mac? Having a startup chime would break that illusion.

Keeping things around just because they've always been there isn't how you design future generations of products. Just ask the headphone jack on your iPhone 7.

Nostalgia may be a nice feeling once in a while, but it is not a feature.